It's Fall again. The students have flowed into our town like salmon swimming upstream to spawn. Its 99 degrees and rising. I drive downtown in search of a icey treat. The frozen yogurt shops have lines streaming backwards all the way to the "tart original." In order to slake my hunger, I grab a couple of the tiny pleated paper cups, fill them up with pecan praline and french vanilla and slurp.


I'm preparing myself. The next day is the beginning of a group that I help to facilitate each fall and winter, our hospital's "Young Adult Bereavement Group." Tucked into that title and invisible to all except myself and the other facilitator is the word "art."


When we first conceived of this group back in 2008, we wanted to create a space for people who didn't quite fit into a childrens' bereavement group, nor on the other hand, in an adult group.


Because the alternating need for privacy and sharing in this age group, 17 to 24, switches on and off like a strobe light, art bridges the gap--literally between silence and speech and figuratively, between childhood and adulthood.


I approach the group with caution, knowing that for the next 8 weeks, I'm immersing myself in the multiple worlds of these losses--attending to nuances so subtle that they could easily pass unnoticed. It's a prolonged meditation on attachment and the slow, inevitable letting go.


It's exactly this sort of attention to detail, as if we were all creating an exquisite painting, that allows me to follow the thread of each individual story, pulling here, tweaking there, hoping that in some way, the unfolding of their stories slowly, almost imperceptibly, leads to healing. The process reminds me of a biblical quote that I read many years ago in a yoga publication, "faith is the substance of things hoped for, the evidence of things not seen." (Hebrews 11:1)


These words conjure in a haunting way, the reality of loss--that as we make our way through--or perhaps more accurately, fumble our way through, we can only cling to something we cannot see--the hope that there is something on the other side of loss.
Posted by Hannah at 8:12 PM 14 comments: Links to this post


The other week, I received an e-mail with a subject line that was strange to me: "B & B blog tour." A bed and breakfast tour on blogs? I was tempted to delete it right away, but somehow, the name of the person sending the note rang a bell: Kesha Bruce.

As a somewhat suspicious person, I'm inclined to ditch things first and get curious later, but in this case, I'm glad I didn't. It turned out that Kesha, a young artist living in New York City, was organizing a rather unusual series of artist exhibitions and she wanted to know if I'd write something about the artist.

"I don’t if you’ve stopped by my blog lately, but if so, you already know that I’m working on a really exciting project called Baang and Burne Contemporary We’re hosting a series of one-night-only art events where, unlike at a traditional art gallery opening, artists, art collectors, and members of our mailing list are invited to attend a small intimate exhibition event in a private home or a hotel suite. We have events planned for New York, Los Angeles, Chicago, and Portland."

"Small and intimate," that got my interest. Now to check out the artist--Stitched Identities by Jane Zweibel is the first in a series of Baang and Burne’s one-night-only art events.

Zweibel's "stuffed paintings" are sewn, stuffed, and lusciously painted sculptural objects that challenge and blur the boundaries of sculpture and painting. The resulting soft sculptures allude to childhood stuffed animals and dolls, while suggesting cartoon figures, spiritual icons, and effigies.

When I looked at Jane's work, I was struck by the strength of the painting countered by the fragility of the pillow form. (How many pillows have you  seen coming unstitched at the edges?) My second sensation was that of discomfort--if I were to lie upon these stuffed sculptures, the surface would be hard, repelling.

Jane speaks to this, saying "these pieces are paradoxical, in that they both invite and repel touch...My hybrid personas embody the conflicts, losses and connections between childhood and adult lives."


Zweibel's work appears to point to harsh and painful truths that we are faced with in urban life; abandoned, decaying buildings (which we can guess house similarly forgotten people) right next to beautifully painted spring flowers, alluding perhaps to flowers planted in a thriving suburb outside of the city where services are alive and tended to--or perhaps an allusion to spring and hope and all that flowers springing up out of the ground suggest.

I was fascinated to find as I read Jane's interview to find out that she works as an creative arts therapist.

"The materials and concepts I develop in my studio transforms into what I do with my clients as an art therapist. Conversely, my creative process is strongly influenced by my work as a mental health professional."

Her work suggests a direction that promises the flowers of hope that she depicts in her paintings; the blending of art and healing.
Posted by Hannah at 10:41 AM 10 comments: Links to this post

An assemblage of diverse elements 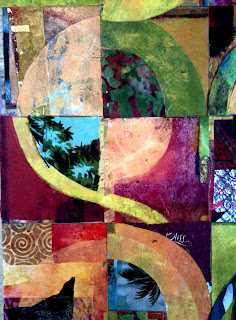 I've been thinking about what it means to create a collage; to take papers, cloth, diverse scraps from the mind's eye and bring them all together in order to create something new and heretofore undiscovered. In other words, to create new territory where there was none.

During this time, I've been listening to Divisidero, by Michael Ondaatje, in the studio and as I drive to work. The novel is a pastiche of exquisitely drawn characters, connected to each other in inextricable but mysterious ways. He uses the metaphor of collage to describe their connections:

"Everything is collage, even genetics. There is the hidden presence of others in us, even those we have known briefly. We contain them for the rest of our lives, at every border that we cross."

It makes sense to me, this notion. As I make my way across the collage I'm working on, I encounter shadows of several patients I've worked with,  a memory of filtered autumn light through studio windows and my earnest musing about appropriate titles. The name of a former piece echoes through several years, to me, this Virgo and I glue layer after layer of myself and my history onto a large and heavy panel. I listen to Ondaatje's words:

"Only the rereading counts, Nabokov said...For we live with those retrievals from childhood that coalesce and echo throughout our lives, the way shattered pieces of glass in a kaleidoscope reappear in new forms and are songlike in their refrains and rhymes, making up a single monologue. We live permanently in the occurrence of our own stories, whatever story we tell. "

What a pleasure it is to be back in the studio again, cutting and pasting cloth and words.

Sometimes, you just know it's time for a break. I'd been planning to take some time off when suddenly, the vortex of life began to whirl around me.

A child on our hospital floor who had been hanging on to life for months, died. My son, who'd appeared to be settled nearby, seized an opportunity and drove off to Florida to pursue his career. With characteristic decisiveness, he totally relocated his life within three days.

It all left me a bit breathless and teary. Sad for the patient, happy for my son, sad because after a great run of years, my active role as a mom is coming to a close.

As I stared down at a finger painting I'd done in our pediatric art group, I saw the proverbial writing on the wall. Time for a change. Time for a break.


Time to pick the figs off our tree and dry them, appreciating the slowness of time passing when it's not being calibrated by a Kronos time clock.

Time to enjoy these early days of fall with a book in my lap instead of a keyboard beneath my fingers.


Time, most of all, to discover where my intuition has been hiding.

For much of my life I've operated from that "still small voice within." Working in a hospital run on a 24 hour clock, punctuated by electronic medical record keeping, tends to dull that inner voice over time.

Dream time--quiet time--is exactly what I plan to give myself during the next 10 days. I want to see if by taking some time to listen, I can find that hidden voice.

Last night I dreamed of ocean waves crashing in the distance while I floated in nearby still waters, gray pebbles beneath me and the beach just a short distance away.

I'll be taking a break from my blog for the next week and look forward to checking in with all of you very soon, renewed and refreshed.