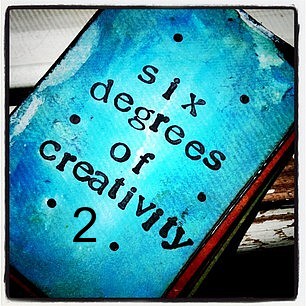 In my daily life, I work hard to carve out studio time. I treasure these precious hours of creativity that bring sanity and grace to my hectic, scheduled life and I didn’t think there was room to add “one more thing.”

However, when I was invited to teach a class for Six Degrees of Creativity 2, I was intrigued and tempted. Six Degrees of Creativity 2 is an on-line art workshop and community, sponsored by the Art Therapy Alliance and includes six different workshops. Each is offered by a different instructor from the art therapy community and explores hands-on art making concepts and techniques as means for social change and transformation.

Although I thought long and hard before taking on that “one more thing,” I knew that teaching one of the six classes could add a new dimension to my studio time, especially since I could choose what I wanted to teach. So, what did I want to learn more about? I invite you to visit my new blog here and find out!
Posted by Hannah at 9:40 AM 6 comments:

I've been all aglow about my new website and the ease of navigating within it from portfolio to blog and back again. It's rather like having a closet makeover (which I've never done!) so that everything is within immediate reach.

I invite you to hop over and see what I've been up to in the studio. It's March and as the first spring flowers have burst into bloom, I've been sitting patiently (most of the time!), pursuing their simplicity and beauty in the studio. To read more, click here.
Posted by Hannah at 11:04 AM 7 comments:

Yesterday, I got a little caught up in getting ready for an exhibit I mounted today, a collection of works I call Pieced Reflections. After I got all the quilts trussed and panels safely cradled, I turned to my blog. In my fear and eagerness, I pushed the publish button while I was still editing.

This morning, on the road somewhere between Davis and Santa Cruz, I found out when my friend, Stacey, announced that she'd already received my latest post. "What?!!"

You guessed it; raw, unedited words. So if you ever wondered what a blog post looks like before it's done, you've seen one now. You'll find the edited version + image below.
Posted by Hannah at 9:59 AM 1 comment:

Time for a New Direction

I'm redirecting my energies, my thoughts and finally, my blog.

As I've said, I wanted to consolidate my blog and my website. While I was thinking about this, the image of elementary school and impromptu jump rope games comes to mind. As the jump rope spun round and round, each girl would put her hands out, moving them in rhythm with the rope, waiting for that moment when it was just right to jump in.

I've been waiting for just that moment to change blog sites and it's arrived. My website+blog,  http://hannahklaushunterarts.com/ is up and running. I've embarked on a new project; a year of watercolor. Each week I'll be posting fresh images and a few choice thoughts. (Like last week when I was trying to paint tulips and the darn things just blew open on me.)

I've been drawing circles since I was four, but my fascination with them as an art form dates back to to the 80's in front of an ashram in Oakland, CA, where, just outside the door, I saw a most astonishing drawing done in a rich array of vibrant colors all contained in a circle.

These circles, called rangolis, were done for religious or healing ceremonies. As an artist, I ached to be able to do something like this and after some investigation, came upon the mandala (the Sanskrit word for circle), an art form with a long history across many cultures. Like the rangoli, it is art created created for ritual purposes in a circular form and these days, also employed in art therapy.

So, while I've been painting, collaging, and inscribing these geometric discs for years, nothing could have prepared me for the excitement about the circle that recently burst upon the art scene in the form of Damian Hirst's spots.

I started poking around and pretty soon I discovered that I could make a distinction between a circle and a spot. It's strictly my interpretation, but the way I see it is that the spot is just that: a rounded mark or splotch made by foreign matter. It seems to have arrived in a rather casual manner.

The circle on the other hand is a closed line, something inscribed in which all the points on the line lie at the same distance from the center. It seems intentional, elegant, something that shows up in nature, but also something that 3 and 4-year olds begin drawing as they enter into the world of representation. The circle is one of the early building blocks.

I looked up on my studio wall, where all three current pieces are iterations of the circle, so I tried to dig a bit deeper to see what was so fascinating-- and, what keeps me returning to them as a form decade after decade.
I'm reminded of something that another blogger, Gwyneth Leech, said in a recent post, "Spots Before My Eyes...:""...there is the infinite variety of things, then there is an infinite variation of one thing." A circle suggests eternity (think of a ring), something bigger than myself, time layered upon itself, the pleasure in creating a multitude of variations on a theme.

The idea that each circle can both be the same yet different; it's own infinite, elegant universe is  powerful. A 3-year taps into these infinite possibilities without fear or the preconceived notions of adults. When I began this post I thought that I'd be arguing for the integrity of the circle, but now that I've experienced spots and dots á la Hirst (and, for a great post on spots, see Joanne Mattera's  "Connecting the Dots), I'm looking to get rid of some of my trepidation and preconceived notions, and hopefully, adopt some of the spot philosophy too.

I know that many of you have had fun in the studio with circles, spots and dots--if you have any stories or images you'd like to share I'd love to hear from you.
Posted by Hannah at 4:42 PM 9 comments:

Have you ever felt the axis of your life shifting? Last year I was deeply focused on my artwork, with art therapy a bit out of focus.

As the year has turned, however, so has my attention. For many years, I relied on observations of my own children's developmental stages to help me understand the children with whom I worked.

Now, with my own children navigating the waters of young adulthood, I no longer have that framework to depend on. While the memories are there, I need to stay fresh in my art therapy practice.

With that in mind, I've been re-infusing my knowledge of art therapy and child development by lots of reading, particularly on the Art Therapy Alliance group threads on LinkedIn.

I've been particularly intrigued by the development of Cathy Malchiodi's "Trauma Informed Practices Institute." In her recent newsletter, she lays out some of the core foundations for integrating mindfulness practice and positive psychology into art therapy.


"Making art can help us become mindful in the moment, just like when one learns to be present in the moment through the practice of mindfulness meditation. In art therapy, we often speak of that moment in art making when "flow" occurs-- an experience of losing oneself in the experience, but at the same time being present and engaged in the process. Being in the flow state can help you become more relaxed and begin to observe yourself in new ways. Art expression itself is a way of creating something new from what you already have, but may not have fully recognized within yourself."
Observing the children on the unit, I would say that the flow state has more and more been relegated  to the world of Wii, Playstation 3 and Nintendo. While there is value in learning to control the actions of characters on screen, I have a personal bias. I think it is just as exciting and possibly more so to be able to affect actions with one's own hands in our three dimensional world.

In other words, how do we help children find their way into the flow state with art, music, dance and other forms of creative expression? That's the question I'll be asking of myself in the next few months as I craft art activities which stimulate that sense of flow. I'll also be looking forward to attending Cathy's class this March in San Francisco: Enhancing Resilience Through Trauma Informed Practices: Positive Psychology and Mindfulness Based Art Approaches.

For a treat, if you click here, you will find a podcast containing a wonderful talk with Oxford psychologist, Mark Williams and a short 3 minute mindfulness meditation that made my day.

As a parent who has recently experienced the empty nest, it's pretty darned exciting to have a project that I've been so involved with that it feels almost like my own child. Which, of course, means it's not without its joys or difficulties. The new child however, is a virtual one, my website. 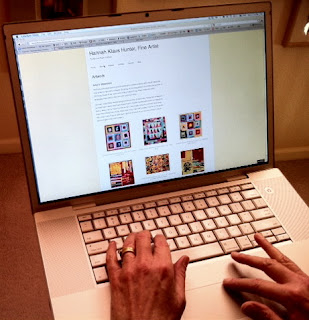 As I've learned to work with the site myself--WordPress book at hand and Google at my fingertips, I've begun to experience a pride similar to what I felt as a young mother.

As they did then, the first few snafus catch me by surprise--like getting caught without extra diapers or wipes in public; but with practice, I've learned how to problem solve. And, like reminding a small child over and over again to pick up their toys, I've tussled with the never-ending chore of cleaning up errant links, and misbehaving formatting.

As with children, there is no stasis, no resting point where the process is over. As I introduce my website, I see it as a work in progress, something that has come a long way, but will continue to develop and grow as I do.

I invite you to visit, to explore the different pages and I welcome your thoughts and observations. In a bit, I'll begin writing all my posts on the WordPress site, but I'm not quite there yet. More on that later.
Posted by Hannah at 6:18 PM 6 comments: